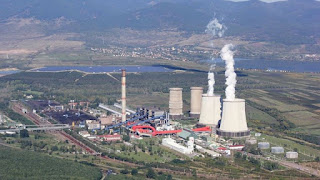 ‘Sky-rocketing’ EU carbon prices could mean Hungary is the first country in Eastern Europe to set an exit date for the most polluting fossil fuel.

Hungary is eyeing an end to coal-fired power generation by 2030, in a move that could shake the EU region most staunchly opposed to tougher climate change measures.
Fast-rising prices in the EU’s emissions trading system (ETS) have pushed the government into talks with the owners of Hungary’s last big lignite power plant, Mátra, about phasing out coal use and installing clean and renewable energy.

“Electricity production based on lignite has no more long-term economic viability in Europe, due to the sky-rocketing ETS quota prices and also the lack of any available future support scheme for coal-based energy production,” Barbara Botos, deputy secretary of state for climate at the innovation and technology ministry, told Climate Home News.

Botos said the government’s “preferred coal exit date” was 2030, although this is not yet supported by an official decision or strategy.
“Hungary intends to provide smart, clean and affordable energy for all,” Botos said. The government is outlining a “positive and innovative” development plan based on low greenhouse gas emissions, she added.

Hungary is not as coal-reliant as some of its central and eastern European neighbours. Poland, the Czech Republic and Bulgaria have the highest percentage of coal power in the EU. Yet on climate policy, the Visegrád Group – Hungary, Poland, the Czech Republic and Slovakia – tend to stick together in resisting measures that would price out the dirtiest fossil fuel. The Three Seas Initiative, of which Hungary is a member, plans to host a climate policy cooperation summit this Thursday.
That cohesion may be breaking, and not just because of Hungary. Slovakia, which also uses less coal, said in December 2017 that it was considering ending coal-fired power and mining in 2023. Economy minister Peter Ziga told reporters on Monday that the government plans to pull subsidies for mines and power plants that year, Reuters reported.

Hungary, meanwhile, is about to begin a political discussion about a coal phase-out, Botos said earlier this month in a presentation to the European Commission’s Coal Regions in Transition Platform. The platform, launched last year, aims to help the EU’s poorest and most coal-reliant regions shift to clean energy by re-training workers, funding renewables and other projects.

Her comments, along with a presentation from a Mátra power plant representative, marked a “milestone” for the country, said Csaba Vaszkó, an independent Hungarian energy consultant who also spoke at the meeting. Even though Hungary’s coal industry has declined significantly, it is still strong in the region around Mátra, in the northeast.

If it sets an end date for coal, Hungary would join a growing group of western Europeans aiming for exits by 2030 at the latest, including France, the Netherlands, the UK, Italy, Portugal, Finland, Austria, Denmark and Sweden. Even coal-powered Germany is expected to set an end date for coal by the end of this year.
In Hungary, the move is motivated by rising costs of EU carbon prices after years of lagging and the fact that Mátra already has concepts for low-carbon projects, rather than making a political break from the Visegrád position, said Vaszkó. 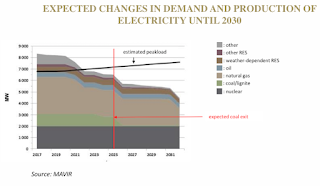 A graph produced by Hungary’s transmission operator and presented by Barbara Botos, deputy secretary of state for climate

Hungary’s second national climate strategy, approved by the parliament in October, aims to reduce carbon emissions by replacing fossil fuels, improving energy efficiency, developing a green economy and adding forests, Botos said in the presentation. Coal-fired power could drop sharply in 2025, according to a scenario she was given by Hungary’s transmission system operator.

Also at the commission’s meeting, Zoltán Orosz, head of strategy for the Mátra power station’s owner, talked about the potential for replacing coal with biomass, gas, solar energy and battery storage in order to keep the plant alive beyond 2030. Further down the line, there was also the potential for building a solar panel factory, he said.
Coal mining and power production in Hungary are already declining, according to the presentations from Botos, Vaszkó and Orosz.

The fuel generated 18% of Hungary’s electricity in 2016 – almost all from the Mátra station. Nuclear provided around half and gas roughly 20%. Most of the country’s coal and lignite basins have been closed, and the number of miners is down to 2,000 this year, from 125,000 in 1965.
However, Mátra’s lignite produced nearly 14% of Hungary’s carbon dioxide emissions in 2016 and half of the energy sector’s pollution.

The fall in costs for solar and wind energy and lithium-ion batteries over the past 10 years can help create new industries, jobs and economic growth, Hungarian president Áder János told the parliament before it voted on the climate strategy last month.
Specifically, Budapest now aims to boost solar power capacity from 500 to 3,000 MW as early as 2022, Botos told CHN. The Mátra owners have installed a 16 MW photovoltaic plant on an abandoned slurry deposit, and plan to add two 20 MW solar plants nearby.

Russia’s state-owned Rosatom is also building a new nuclear power plant, which would replace older units in the later 2020s.